Pleased we finished the ride in good shape and good heart. All went pretty well according to plan which was a relief. Planning ahead was fun but means you are committed to a schedule. Hence the relief that it worked out.
For those like me interested in stats we did:
1066 miles
Average speed 12.9 mph
Total ascent (and descent!) 51820'
Longest day 93.32 miles
Top speed 48.8mph (briefly)
Hardest day. Day 1.
It's true what they say. Hills are far worse in Cornwall and Devon than in Scotland, compounded by very hot weather and gale force headwinds!
Rest of the way though the winds were more behind which was v helpful.
Bed and breakfasts and hotels pretty variable but generally pretty good. I can recommend excellent places near Preston and on Arran, and places to avoid in Camelford and Mallaig!
If I ever did the end to end again (unlikely!) I would probably spread it over 3 weeks and reduce the daily mileage. More likely would be a cycling tour of the Western Scottish Isles which were stunning and good fun hopping on and off ferries. I would avoid the midge season though!
The Blog seemed to work well and I've had lots of comments about it, including from friends in Denmark and Australia! However people had difficulties leaving comments unless they had a google account. It would be good another time to have a blog to which it is easier to leave comments. Many thanks for the emails and texts though - they were nice to receive en route.
I think I will have raised about £1500 for the work on Gambia so many thanks for your contributions.
I didn't realise until about Day 7 that I could add photos! So here for completeness is a photo at Lands End. Also one crossing the Severn Bridge and another on the Mersey Ferry. Hope you like them.
Thanks for reading this. Hope to see you soon. Best wishes to all. Malcolm 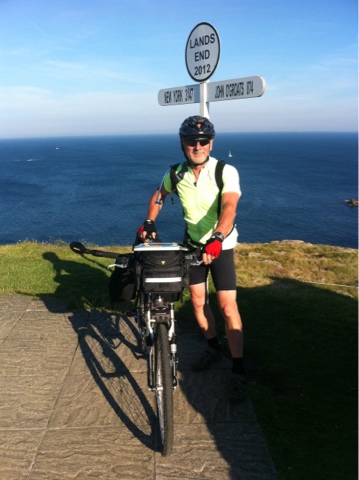 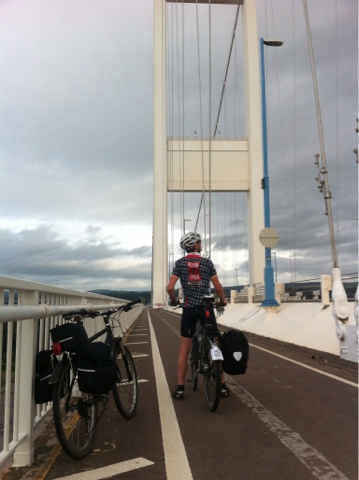 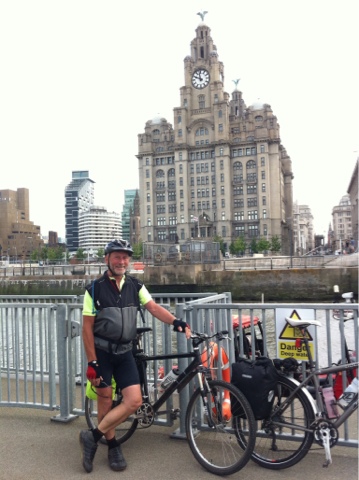 Posted by Malcolm Garner at 00:36 No comments:

Made it! The end of the end to end

Ok that's it then. I preferred Dunnet Head but I suppose JOG has to be done. Total mileage 1066.
Now having a warming coffee (its quite chilly here) before the lengthy drive to Edinburgh with Rob. Pleased to have finished with no aches or pains, just nicely tired.
Thanks for messages of support, they've been much appreciated.
The photo here isn't very good against the sky but at least proves we were here!
I may add final thoughts when the dust settles but look forward to seeing some of you at least soon. Cheers for now and thanks for reading each gripping instalment. 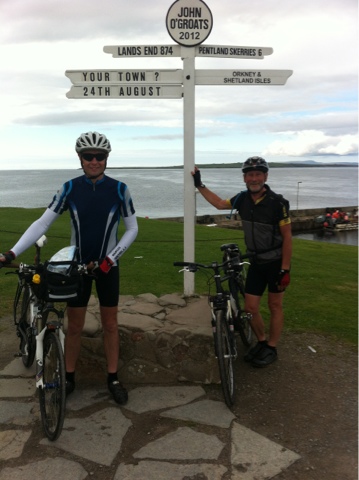 Sorry about the pun but this is really the more meaningful end of ride. Dunnet Head is the most northerly point on British mainland (in case you can't read the inscription!). Orkney in background.
JOG next stop 12 miles to go. 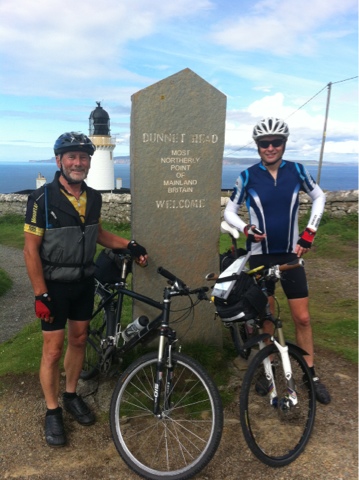 Posted by Malcolm Garner at 07:01 No comments:

Now at Tongue after a fantastic afternoon ride across the most beautiful and remote landscape. The sun was out, the wind behind us and next to no traffic at all. You could see for miles and not a soul or house to be seen. Awesome. Better still Rob arrived as I had my stop to celebrate passing 60 miles (I had a break at 10 mile intervals) and we then leapfrogged taking photos and admiring the views. The B&B is very nice as well and we are now in the hotel about to have a pint and some grub before our last days ride tomorrow. We did west coast to east coast yesterday and now north coast today! Great stuff! The scenery here at Tongue is lovely as I hope two of the attached photos demonstrate. There is one problem though - midges! Ok when cycling, a nuisance when stopped by the coast. Hey ho. 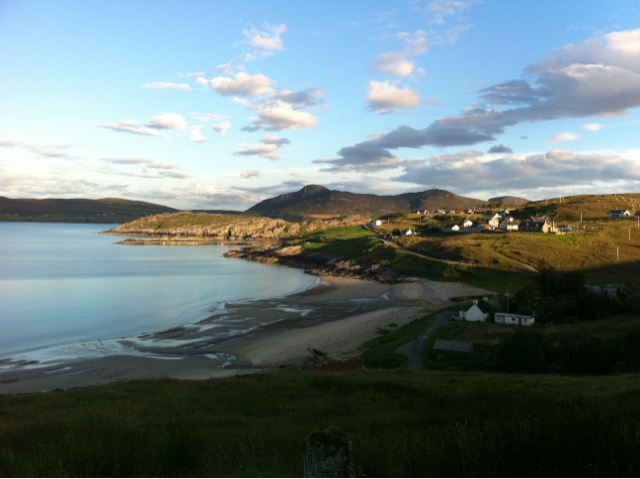 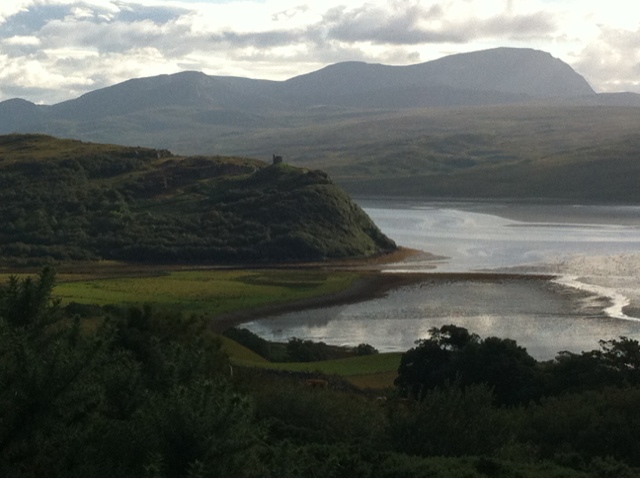 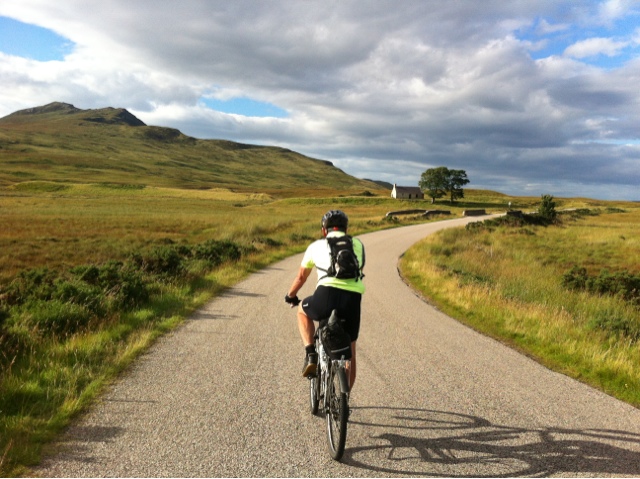 Well I'm feeling more tired today. Wonder why?! Had a good evening with Chris's friends. B&B was rather strange. More like using the small spare room in someone's house! We got away about 8.30 and dropped off main panniers at the SNH office for Rob to collect on his way to join us. Glad of reduced weight but still pretty slow up the hills. We've managed 40 miles this far though so 37 to go after lunch to Tongue. May be what they call a 'Steady One'.
Posted by Malcolm Garner at 05:12 1 comment:

I hadn't been looking forward to today, knowing from the planning that it was the longest day, then to find heavy rain warnings. And we did get some of that and took shelter several times. BUT we had a strong tailwind much of the way and the A890 turned out to be a nicely graded road sober made good progress. In fact we averaged 13.5 mph which, considering the weight of the bikes, isn't bad. Tomorrow Rob is collecting our bags on his way up to join us so we will have lighter bikes from now. The photo shows one of the sunny bits on the A890/A832 with a mountain with an unpronounceable name. Traffic was pleasingly light. This evening we are meeting a couple Chris's friends who are on holiday here. The B&B is out of town a bit but a pleasant enough bungalow with a view across to the Cromarty Firth and the long road bridge across it. This is the furthest north I've ever been on the mainland! Until tomorrow that is ..... 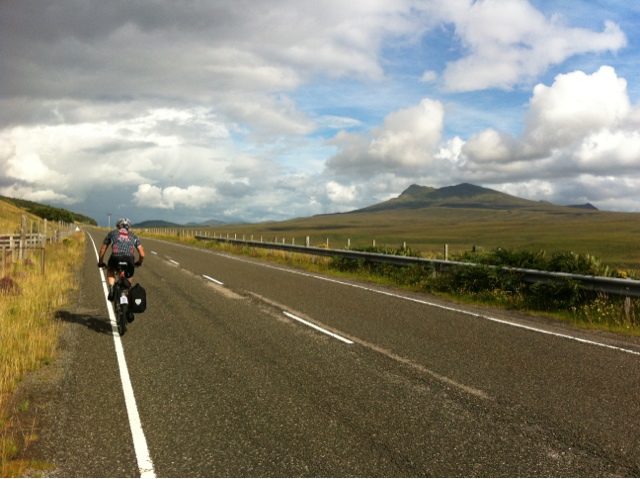 Posted by Malcolm Garner at 10:55 No comments:

As you can see on the background we have just crossed back from Skye over the bridge. Easy ferry crossing and roads on Skye were generally good. Had one cloudburst though which soaked us and the roads. I persuaded Chris to buy a small umbrella yesterday as there are often no trees to shelter under here. Been glad of it already!
67 miles to go and feeling good at the moment so hope the rain stays away though just passed a sign warning of 'heavy rain'. At least the wind is behind us. 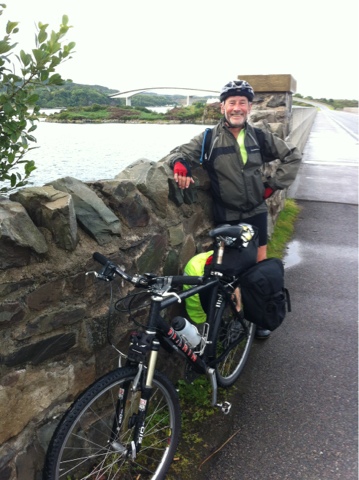 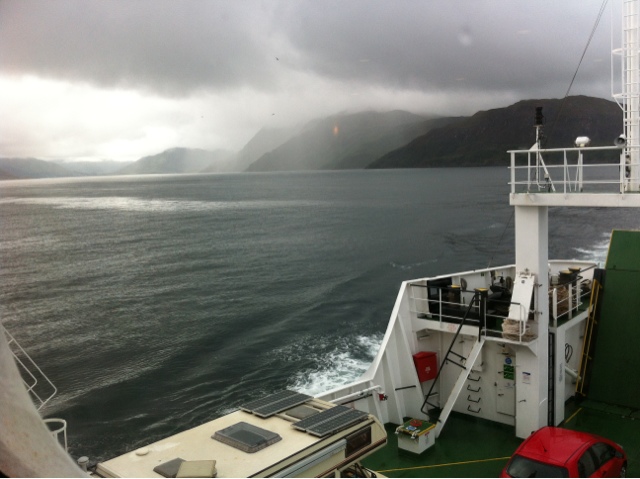 Posted by Malcolm Garner at 02:54 No comments: